Art is a shared experience and artists in Brunei have in recent years taken their art forms to public spaces, transforming them from drab to fab. Graffiti and outdoor art are increasingly appreciated as a creative art form, accepted for bringing not just freshness and colour to public spaces but also insights into Brunei’s culture, history and the artistic expressions of the younger generation. From historical mosaic murals to eclectic street art, we list four places where art was made for sharing.

Up on the front of the Dewan Bahasa dan Pustaka, the Language and Literature Bureau, is a 30-metre wide mosaic mural and one of the oldest outdoor artworks in the country. Commissioned by the 28th Sultan of Brunei – the late Sultan Haji Omar ‘Ali Saifuddien Sa’adul Khairi Waddien – and completed in 1965, this large art display was created from mosaic tiles made according to a painting conceptualised by local veteran artist Pengiran Dato Paduka Haji Asmalee bin Pengiran Ahmad in 1963.

You’ll get a quick snapshot of Brunei’s history and culture from the entire length of the artwork depicting people engaged in various activities that are part of Brunei’s economy such as songket weaving, fishing and rice planting, as well as modern industries relating to oil and gas, science and technology. This building now functions as a public library and is one of the photographic highlights of Bandar Seri Begawan, its mural a beautiful interpretation of the artist’s vision of the country’s future interwoven with memories of a Bruneian life in the past. 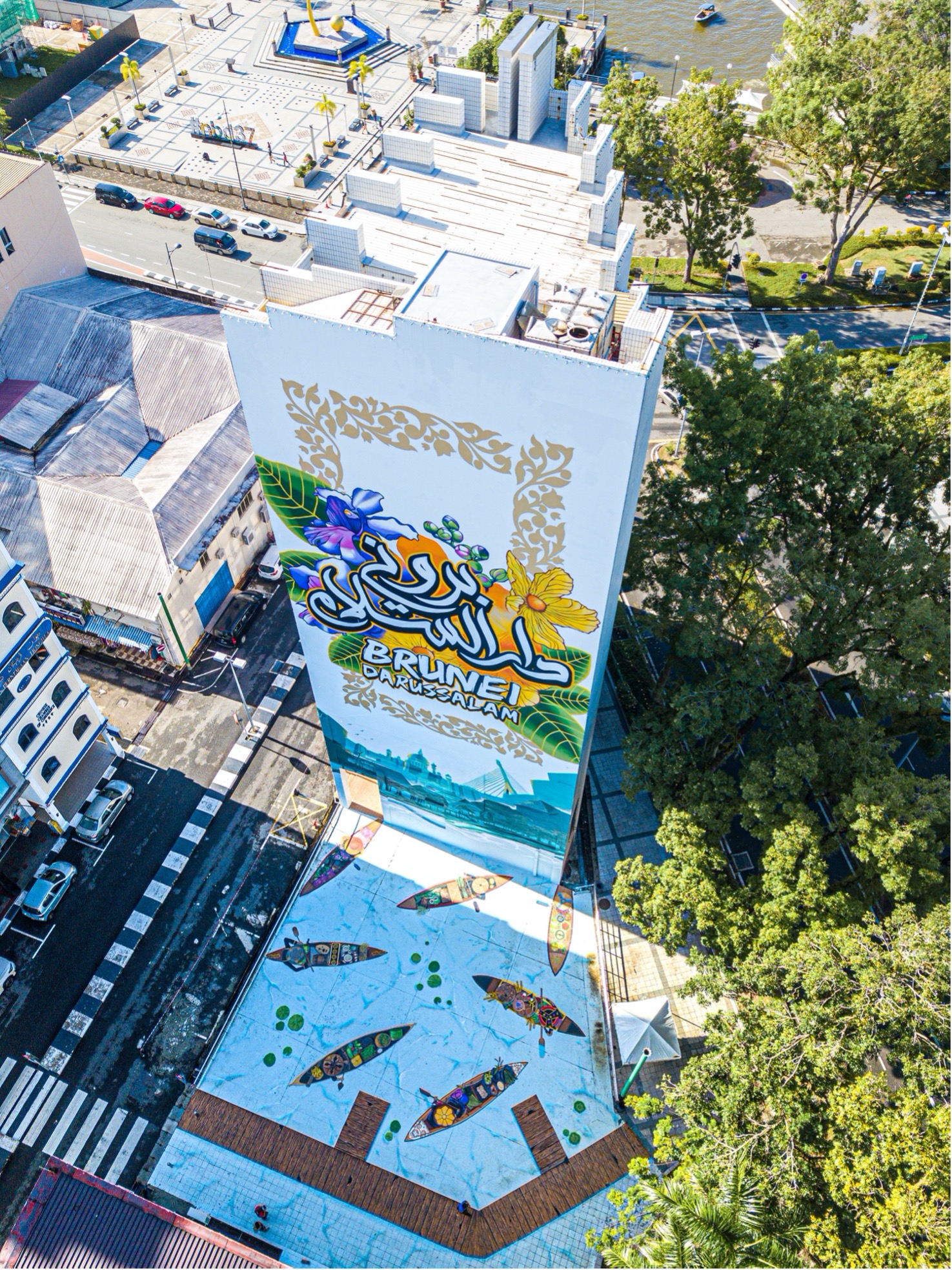 The biggest mural in Brunei, aptly named The Big Wall, was part of a project to beautify the surroundings of Jalan Roberts in the capital and turn it into a pedestrian walkway. The mural is behind the BIBD Ar-Rahnu building and it stands at about fifteen storeys high.  Designed and created by a collective of local graffiti artists, this towering art piece features the national flower, bunga simpur and the Vanda Miss Joaquim orchid locked together in the middle with Jawi calligraphy – the artists’ vision of the collaboration between the state and private sector on this project.

A monochrome montage of iconic landmarks fill the lower half of the wall, a harmonious mesh of images of beloved places often photographed in Brunei. The floor is transformed into an exhibition ground too and you can see the Sultanate’s indigenous culture through the ‘Seven Padians’ floor art, which shows seven boats representing the river commerce of the seven ethnic groups of Brunei: Brunei Malay, Kedayan, Murut, Tutong, Belait, Dusun and Bisaya. The padian or the boat from which traders who marketed their wares on the Brunei River, can be identified by the distinctive symbols, colours and motifs of each ethnic group.

When crude oil was discovered in 1929 in the town of Seria, it became the driving force behind Brunei’s economy. In 1991, the Brunei Shell Petroleum Company built the Billionth Barrel Monument to commemorate the one billionth barrel of oil extracted from the Seria oil field. The walkway to the monument is flanked by 15 concrete columns on each side. Every column has a side covered in colourful artwork, each an interpretation of the oil and gas industry by a local artist.

The monument’s location by the beach is near the site of the first oil well in the field. If you are interested in capturing a piece of this country’s oil production history and the remnants of early oil drilling mechanisms, a visit to the monument will provide both. Nodding donkeys in their deep green colour still stand in the fields nearby, some continue to pump away with their gentle rhythmic nodding. At dusk, the site is awash in brilliant shades of the sun, complementing the colours on the walkway to this important monument.

The skateboarders in Bandar Seri Begawan have a place to call their own – the skate park located near the Hassanal Bolkiah National Stadium. Officially named Taman Budiman, it is, however, fondly known as the Skatedium among local skaters. As it is the domain of the young, restless and agile, the park is suitably decked out to reflect the energy of the youth. Graffiti artists have made this little corner of the stadium their studio and leave their artistic expressions on the concrete ramps and walls for the benefit of the skaters and general public.

The art is usually abstract but sometimes there are recognisable cartoon characters or popular figures. The artwork is often vibrant and whimsical but sometimes they are muted and dark, it all depends on the artists of the moment. Don’t expect to see the same artwork after a few months as the park is an ever-changing canvas on which the artists are eager to work on. Whatever the updates, you can be sure there will always be something imaginative and conversational.

Show your support for the local performing arts …

Want to know what kind of activities khatcentre.bn…

Today's rampaipagi.rtb interview at 9:40AM …

Who's ready to take up the challenge? As part…

We're left with 3 days before the festivities…

Show your support for the local performing arts …

Want to know what kind of activities khatcentre.bn…

Today's rampaipagi.rtb interview at 9:40AM …

Who's ready to take up the challenge? As part…

We're left with 3 days before the festivities…