While trekking along our rainforests, you’ll find that Brunei is no short of its rich diversity of wild creatures. Taking residence across various areas of the country, these critters are inherently shy and especially hard to spot.

Fret not though, as our tour guides know their routines inside out and will lead you to the best places you can spot them. 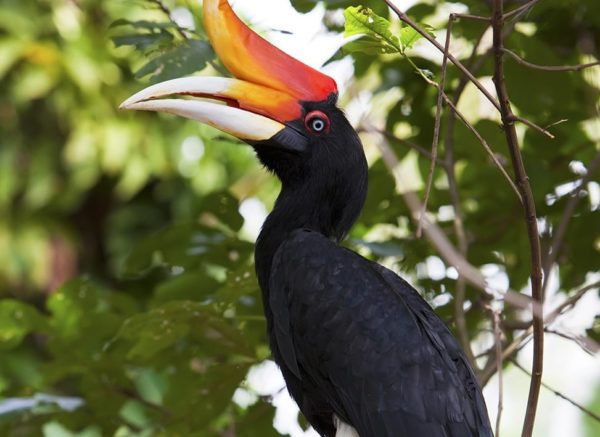 Due to the strategic location of the Brunei rainforests, it acts as a common stop to a slew of migratory birds, including some incredible ones. One of which is the Rhinoceros Hornbill, an endangered hornbill species that inhabits the vast expanse of Ulu Temburong National Park. Found also in Peradayan Recreational Forest and certain areas of Kuala Balai, the distinctive avian is extraordinarily rare and holds a special place in Sarawakian native cultures – being closely associated with the god of war in Iban legends and folklore. 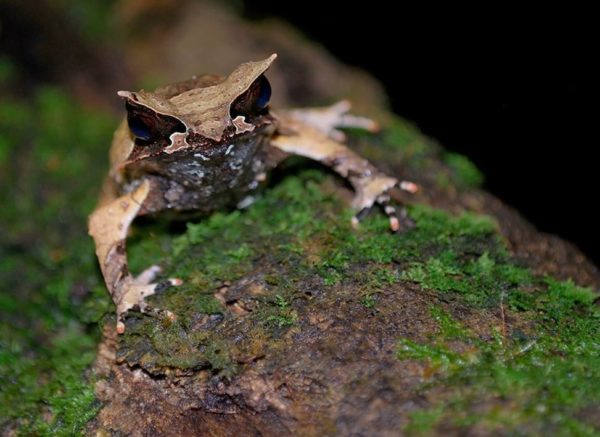 Known for its intelligence and wit, this small amphibian is endemic and indigenous to the Bornean rainforests. Capable of camouflaging itself using surrounding leaves for protection against predators, the Bornean Horned Frog is also known for its prominent pointed stout which comes in handy for catching prey when hiding in the undergrowth. The long-nosed frog can sometimes be found rummaging the wetlands of Ulu Temburong National Park. 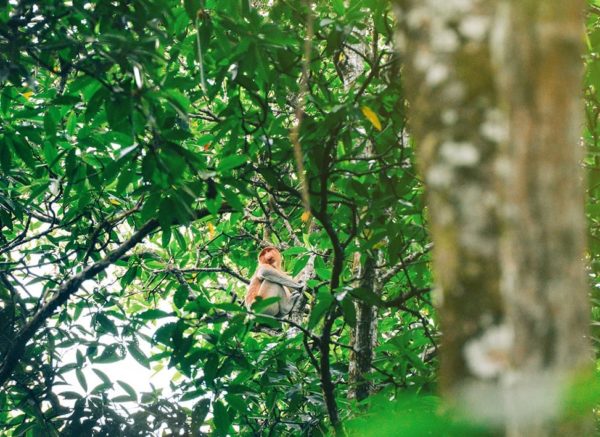 One of the most endangered creatures in the world and perhaps the most sought-after primate in Brunei’s wilderness, the Proboscis Monkey is a traveler’s favourite. Native to the island of Borneo, the animal thrives in the tidal lowlands – particularly in the mangroves and swamp forests. With luck, the monkey can often be found munching on fruits and leaves by the river on the way to Ulu Temburong National Park. Many people find the monkey’s odd, bulbous nose to be unattractive, but it is actually used to attract and impress other female Proboscis Monkeys. What a fellow. 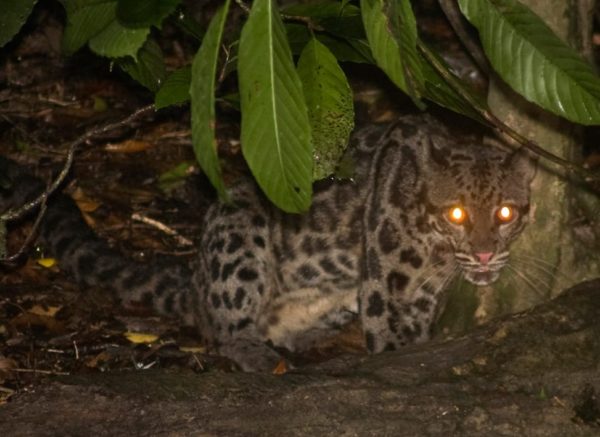 Let’s be honest, the chances of catching a glimpse of the rare Sunda Clouded Leopard in the wild are pretty slim, even for a native. But that’s what makes it all the more rewarding when you do spot it. Both nocturnal and notoriously elusive, it was only recognized as a unique species of its own back in 2006. Despite its name, the cloud-spotted feline is actually of a separate genus to leopards and other cat species, and is more likely to be a wildcat. Some say it was once spotted in the hilly rainforests of the Belait district, as well as near Sungai Ingei Forest. 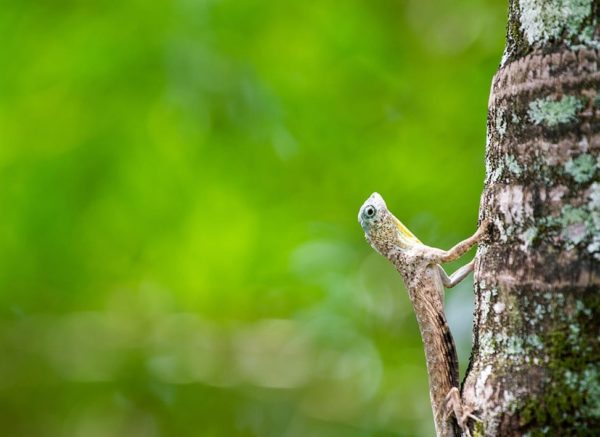 Hard to spot even when it’s in your hotel room, the Flying Lizard is another remarkable little creature that resides in the rainforests of Brunei. Best found within Ulu Temburong National Park, these reptiles are most famous for their ability to open their “wings” and take to the skies, inviting you to test your skills of spotting for these covert lizards in the air above. 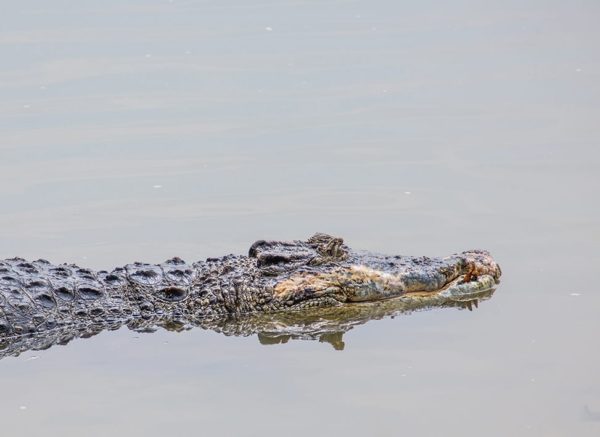 Found in the backwaters along the coast of Brunei Bay, this mighty reptilian marvel is extremely rare and dangerous. Referred to as ‘buaya katak’ by locals, the Saltwater Crocodile can grow up to 7 metres long in size – making it the world’s longest and largest crocodile species. A sight to behold for sure, but perhaps not the safest one. The fearsome beast is also notorious for leaping out of the water and attacking humans. 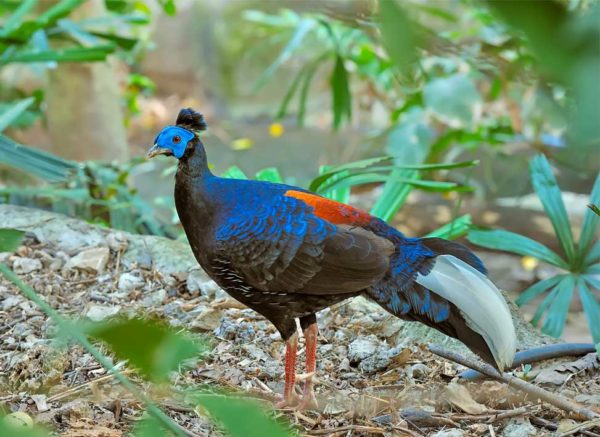 At first glance, un-experienced bird-watchers might call the Crested Fireback a much smaller-Peacock, they’re technically not wrong. The Swanky forest-pheasant can be bird-spotted around the lowland forests of Borneo and Sumatra, found primarily at the Ulu Temburong National Park, Peradayan Recreational Forest. This medium-sized feathery-friend of ours however is facing a threat from bird-hunting and deforestation. 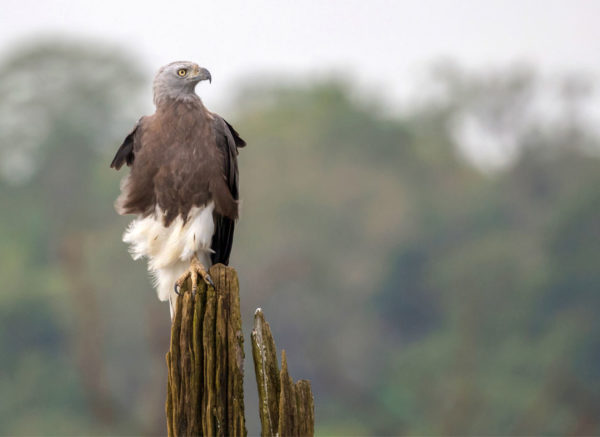 Can you guess this Eagle’s favourite prey? The Grey-headed Fishing Eagle nests around large pools of water, such as Sungai Seria, and Sungai Tujoh. Though satirically given the nickname ‘Tank Eagle’ due to its long and large wings it uses to dive for fish, it is often confused with the Species of White-bellied Fishing Eagles, which are also excellent fish hunters. The calls of these Predatory-birds tend to be a gargled “awh-awhr” 5 to 6 times in a row. 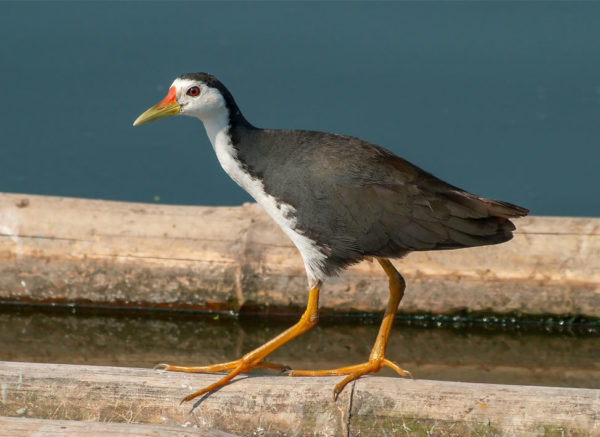 These birds are a common sight, found primarily in and around Brunei, from short grasses to low bushes. The White-breasted Waterhen has long bony-legs which allows it to run when agitated; also when alarmed, the alert-bird makes a frog-like sound that notifies surrounding flocks of predators. The Malays in Brunei have named it “ruak-ruak”, from the noise it makes. 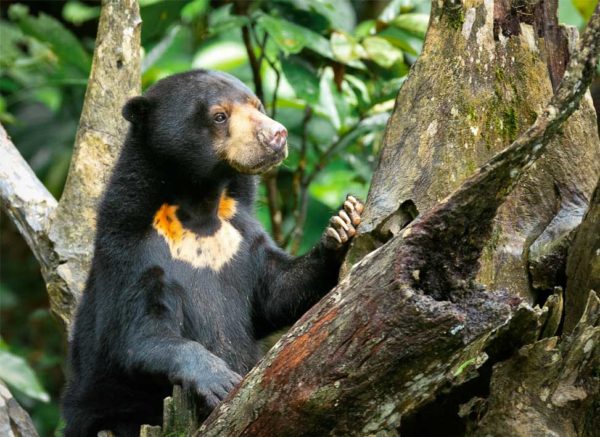 This fierce behemot is often seen tip-toeing, like a shy ballerina, scrounging a clawful of honey, and occasionally, insects for lunch. The Sun Bear can be heard with a fierce roar in most tropical-rainforests around South-East Asia. However, sights of these short jet-black furry bears are depleting quickly, the global-population of Sun Bears have declined a worrying 30% from constant deforestation and bear-hunting. So do keep in mind that glimpses of Sun Bears can and should be rare. 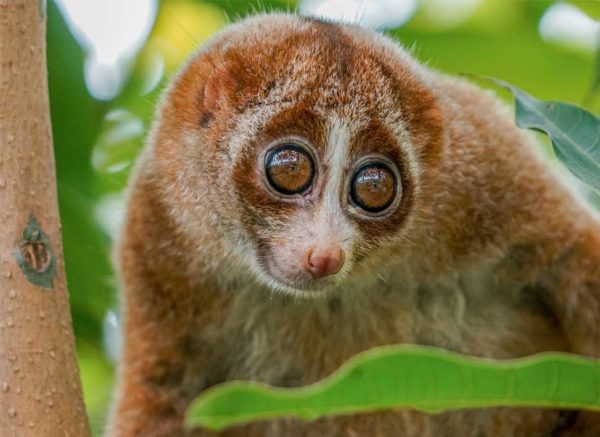 With a distinctive flat-face, round head, and large eyes, like all other species of lorises, the Bornean Slow Loris was recently given its own name and status after a study concluded that the lorises found in Borneo had facial markings not found on other loris families. They prey on insects, fruits, and nectar; but the Bornean Slow-Loris themselves have been a prey to illegal trafficking and loss of habitat.

If you ever come across a Bruneian anywhere in the world, ask them about their favourite local cakes, and you’re bound to hear one or two from this list! Earn extra brownie po…

An emerging must visit golfing destination especially in the Southeast Asian region, taking advantage of the beautiful scenery of Brunei’s lush green landscapes complete with …